If your child is starting middle school, it is recommended that you incorporate ‘skipping middle school’ in your homeschool planning with your child. I did this recently with my 11-year old. He knows his weak areas and he knows his strong areas. I had told him that we would have a meeting and discuss his homeschool plan for the upcoming year together. So as I sat with two small whiteboards, he brought up ‘skipping middle school’. It was a term that has been permeating and infusing our home for a few weeks due to the daily video-editing my older son was working on. I had spoken about homeschooling the high school years in a local homeschool conference along with my fellow homeschool co-op moms. We needed the recordings of that conference edited before they were uploaded onto Muslim Home Educators. So for days on end, we heard the recording of my talk and other speakers replayed again and again beyond the point of cringing. It is little wonder that my 11-year old picked up on ‘skipping middle school’. Nevertheless, him being familiar with it made it easy for me to bring it up in our discussion, so we jumped straight into it.

“Ok, Z, which areas are you strong in?” I asked, showing him the list I had written on the whiteboard.

He examined the list and pointed to ‘Math’ and ‘Foreign language’. I circled them in blue. 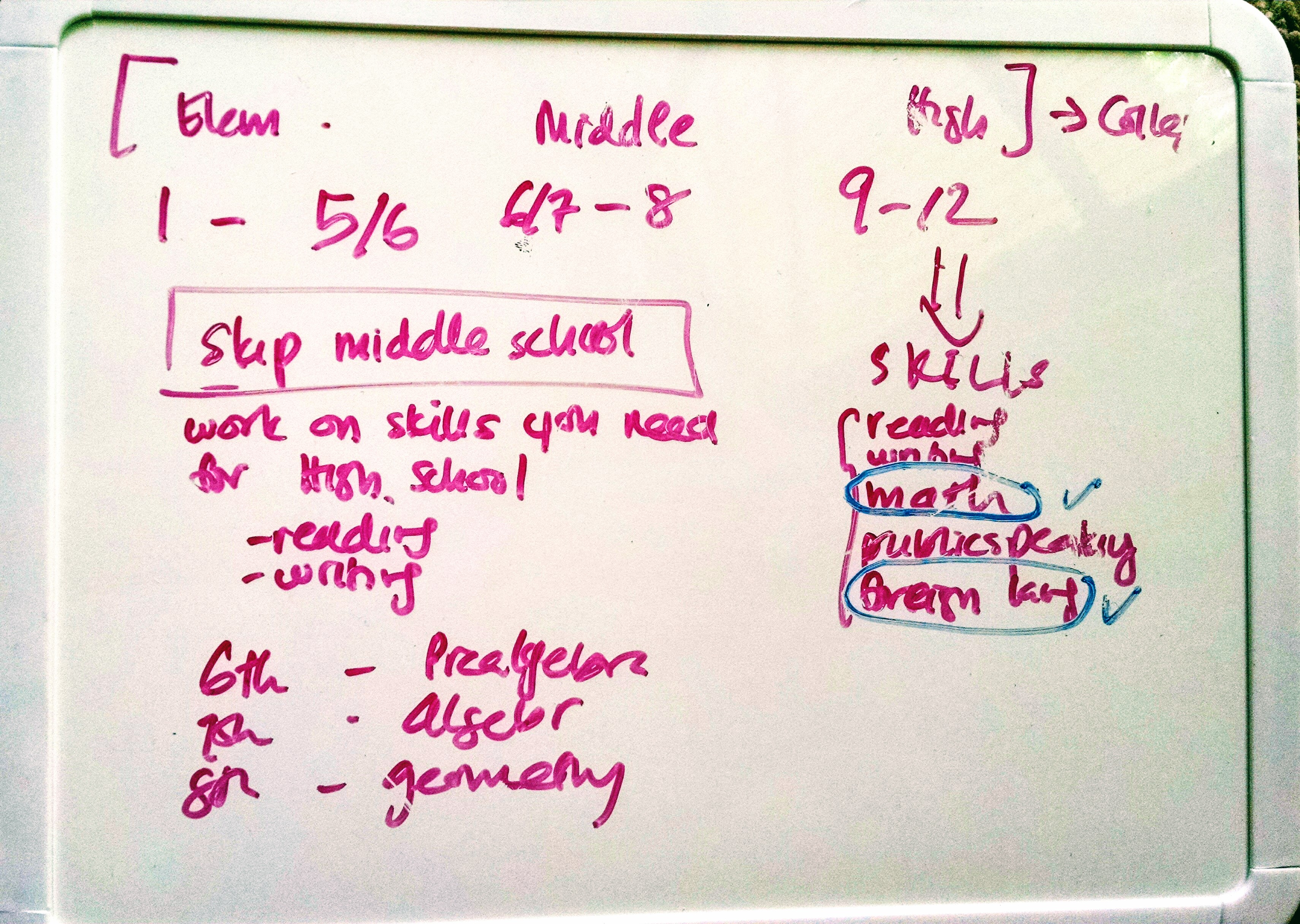 “Okay, so now that leaves reading, writing, and public speaking. These are what we need to work harder on so that when you start high school, you won’t have much trouble with them in shaa Allah,” I explained as I pointed towards the other items in that list. He nodded.

I explained to him how we could use his areas of strength to leverage his middle school.

“You see this math, Z? You’re starting 6th grade, right? So, you can do PreAlgebra in 6th grade, Algebra in 7th, Geometry in 8th, and by the time you start 9th grade, you will be done with the high school math! You can then take other math in high school if you want to. Or do other things.”

He looked on with interest, a slow smile etching itself on his face.

As I mentioned in Part 1 (Homeschool Planning: Involve Your Child) of this article series, we discussed the different kinds of math enrichment he could dabble in. The idea behind this is to utilize his strong areas as a part of his learning that gives him a challenge that he enjoys. It’s similar to choosing your college classes in a semester. You have to take the core classes, some of which are tough. So to make the semester at the very least tolerable, you balance it off with lighter, more enjoyable classes. Similarly, in homeschool planning, especially with ‘skipping middle school’, since it might involve working on weak areas, which can be quite a chore, it makes perfect sense to include activities that leverage the student’s strong areas, especially ones he already enjoys doing. Leveraging the student’s strong areas can translate to the students doing high school level courses in middle school, but it can also translate to enriching these strong areas either academically or non-academically. In my son’s case, math enrichment is his favorite pastime. For another child, it might be dabbling in entrepreneurship, or mastering the art of calligraphy, or creative writing. The options are remarkably endless!

The plan with working on the weak areas is to focus on skill acquisition rather than follow a curriculum for 6, 7, or 8 grade per se. For example, high school English requires students to do a lot of compositions. The 5-paragraph essay format is what they have to master, along with its own technicalities such as forming a strong thesis, topic sentence, and fleshing out the bodies of the paragraphs. In order to prepare my son to do this in high school, we will utilize middle school to work on these skills. I have already taught my 11-year old the format of the 5 paragraph essay using the Four Square method when he was in 4th grade. However, his weakness is in expressing his thoughts, both in written form and verbally. So, this is what we will be working on for part of his language arts. The concept of skipping middle school here is to give time to students to catch up in areas they might be weak in. For students who may be weak in math, these years might be used to work on remedying that area.

High school English also delves into literature analysis. For this, I plan to continue reading with him and exposing him to good literature while at the same time, including character analysis, finding themes and symbolism, making connections with the text, pointing out writing style, authors’ word choices, and literary elements as well as open- ended questions in our discussion related to our readings. Without making it into a worksheet, workbook-laden activity, that is.

Through all this, it is the goal that by the time the student is ready to begin 9th grade, he is well-prepared to tackle high school English and make the most of the experience to the best of his ability. As for the strong areas, when he gets to high school, he can explore higher math, or other subjects of interests in place of math (including extra curricular activities such as entrepreneurship, work study, internship, martial arts, archery, etc). This is if he ends up completing Algebra and Geometry in middle school. There are only a number of high school level classes that can be taken in middle school that will have a place on the high school transcript, namely Math, Science, and Foreign Language. So, if a student’s strong areas happen to be in any of these subjects, he can complete or take some of them during middle school and not have to take them in high school, which frees up some time for other pursuits.

For foreign language, my son picked Japanese as the foreign language he wants to master. He has learned the writing systems, namely Katakana, Hiragana, and some of the Kanji when he was in 4th grade. Our focus for 6th grade is for him to learn to speak it. If he wishes to continue with Japanese, it is the hope that he would be fluent by the time he finishes high school in shaa Allah. If that happens, then that’s foreign language on his high school transcript without him spending too much time on it in high school! That extra time created can be utilized for other pursuits or higher pursuits in the strong areas. Maybe he wants to learn Chinese next, or maybe he wants to learn another foreign language, or he might even take up Parkour in the footsteps of his older brother!

If a student is advanced in writing skills, but weak in math, middle school should be the time for him to focus more on his math, and less on the writing skills. If you think about it, it’s about equality vs. equity. Spending the same amount of time on weak and strong areas is equality. But spending more time on weak areas to strengthen it and enough time on strong areas to maintain and polish it is equity.

The whole point of skipping middle school is customizing your student’s education and optimizing his high school experience. The direct result of this is that the student has more time to pursue his interests, further his strong areas, and engage in extracurricular and community service. For example, a student who has the time to pursue mastering calligraphy because he or she is interested and invested in it, may end up using this acquired and earned skill to teach others and earn some side income during high school. Another student who is naturally inclined towards community service might very well realize that she loves working with people and helping them, which ends up in her going for a Psychology major or Social Work in college. Yet another student might dabble in entrepreneurship, learns about marketing, financial management, consumer service, and time management and find that this is his calling.

To sum it up, the benefits of having this extra time in middle and high school are resume-building, potential scholarships, impressive college package, finding their calling, discovering what is meaningful to them, realizing the possibilities of how they can best contribute to the society, and most importantly, growing into wholesome members of the ummah. They are not just strong in academics, but they are also strong in soft skills, and really interesting people to boot!

So, if you decide to ‘skip middle school’ and include it in your homeschool planning, do remember to document everything your child does from this point onward. This is particularly crucial because he or she might be doing high school level classes during middle school. Not only that, be sure to also document all the extra curricular activities no matter how insignificant you might consider them, for you never know, they might have a place on the official high school transcript, or the resume!