I don’t have class (Al Huda Taleem Quran) today and tomorrow, so it’s a little light alhamdulillah, though I’m still weighed by the grammar lessons I have to make up, and the Lesson In Charge review recordings I have to listen to. But, in light of a relatively light day compared to my usual weeks, I decided to spend time with the kids, especially Z. I didn’t have anything planned for him, so we simply did the addition chart on his Hajj theme pack, using counting chips and his ‘acorns’, and completed one chart. I put it away and asked him what else he wanted to do. He took out his lapbook. The idea of doing this was apparently still lingering in my head, and before long, I found myself all hyped up. This state is familiar to the older kids. Whenever I get an idea for something, I get over excited and I start talking and asking their opinions and well, this is when I start to come up with something completely impromptu. That seems to be the theme in my life (not always a good thing).

We were taking out the hujjaaj, and I was thinking to just maybe have the paper hujjaaj make hajj around a cube. When my idea hit, I took a roll of butcher paper, unrolled part of it, laid it out, looked for stuff to use to make this, and before long, we had this going on: 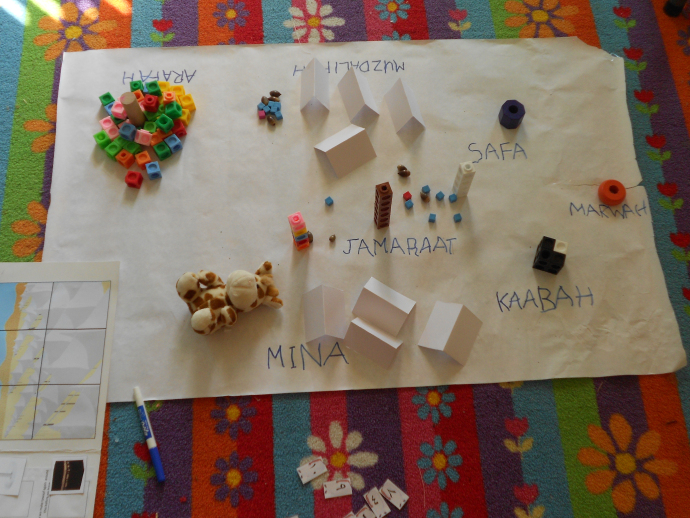 I gave him the snap-on cubes (from the kindergarten days of the 3 older kids) and told him to make a cube for the Kaabah. He was able to figure it out by himself. Then he made the pillars for the Jamaraat. He even said,

He made them different heights on purpose.

We made the tents by fold index cards in half. I wrote the names of the places on the paper with pencil and had him trace them with marker.

When picking hujjaaj for each of us, I asked him,

“I’m picking ti’sa. Which Hujjaaj are you going to pick?”

Alhamdulillah, Alhamdulillah. May Allah continue to inspire me and make it easy. Ameen! And may I never be ungrateful! Ameen.